Would you pay $800 for a new state of the art futuristic tennis racquet? That’s how much this mysterious racquet would cost if you bought it today!

I first laid eyes on this historic but then revolutionary coal-black racquet with yellow racing stripes in 1977. I had volunteered as a junior linesman for the Surf Resorts Cup at the Kona Resort Hotel, the Ilikai Grand Prix’s second leg.

He was a former world-ranked player and Canadian Davis Cup player who played in 24 different countries – winning 19 national titles. Peter won the Ilikai Grand Prix title by the slimmest of margins over Sunlight Gerstmar. Tied in Grand Prix points, Burwash edged out Gerstmar by a better percentage of games won and lost.

After his pro career, he established Peter Burwash International, which manages tennis operations at clubs and resorts worldwide. He also became an author, motivational speaker, television commentator, and coached some prominent tennis players. 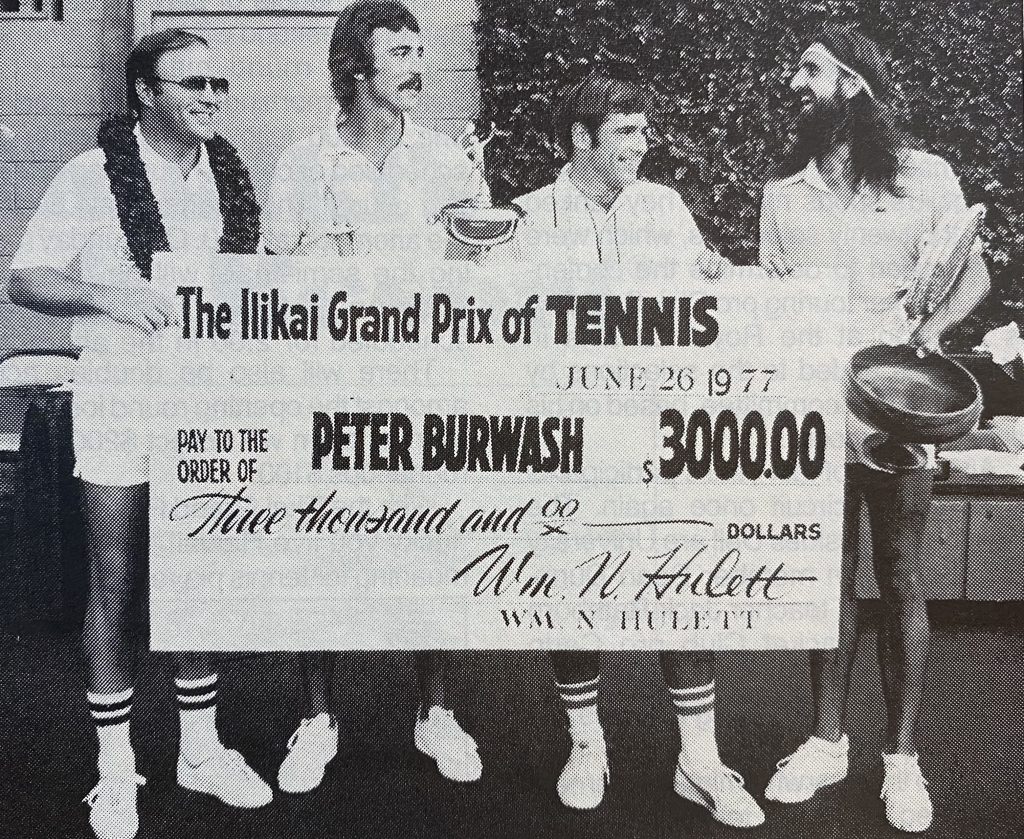 Back then, tennis players either played with a wood or metal racquet. Enter the futuristic invincible continuous graphite fiber and Kevlar tennis racquet — heat resistant and virtually indestructible. It didn’t warp and get mushy like wood. And it didn’t fatigue like metal.

The cost? Well, to put things in perspective, my Garcia Pro 240 wood racquet cost me $30, and in today’s economy, it would cost about $120. The Aldila Cannon’s price tag was an unprecedented $200, which equates to $800 today!

This futuristic Cannon tennis racquet was produced in 1977 by an American company, Aldila Incorporated. They were the originator of the graphite golf shafts.

Aldila’s innovative tennis racquet started the evolution of graphite frames and was the model other companies tried to copy. In case you’re wondering about the racquet specifications, here’s a racquet that’s strung with Victor Imperial natural gut and a calfskin leather grip. Maybe some of you are too young to have ever played with a wood or metal racquet, but if you played tennis in that era, I’m sure it didn’t take you long to convert to a graphite racquet as the price tag became more reasonable.

Most quality racquets in today’s market go for about $200. We should all be happy that it doesn’t have to cost a fortune with today’s technology!

It would be nice to hear from you, so please comment below. What was your first racquet?